Smart Giving Is a Win for All 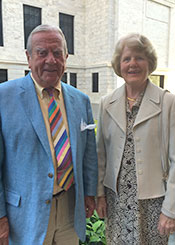 Sandra and Richey Smith have supported and enjoyed the Cleveland Museum of Art for more than 50 years, ever since the couple returned to Richey’s hometown of Akron in 1963.

Sandra can trace her passion for art at least as far back as her undergraduate education. She studied art history at Mount Holyoke, spending her junior year abroad in Italy—where she immersed herself in the country’s art and culture. Following graduation she worked for three years in the commercial office of the Italian Consulate in New York. After settling in Akron, Sandra began a career at the Akron Art Museum—where she worked for a brief time as a registrar and a librarian, followed by many years as a volunteer and board member.

Richey’s educational and professional pursuits led him onto a different path. He earned his undergraduate degree from the University of Virginia then served as an officer in the United States Navy. Indeed, the couple met when Richey’s naval ship was stationed in Sandra’s hometown of Jacksonville, Florida. After moving together to New York and then Akron, Richey worked for Sun Rubber and A. T. Kearney before buying and growing a swimming equipment and outdoor furniture company.

As years passed, the Smiths increasingly found themselves in Cleveland. They had many friends in the city and made frequent trips for a casual get together and social event. Visiting the museum was often at the top of the couple’s day-trip itinerary, so much so that they decided to become members. Later, Richey deepened his involvement by becoming a founding member of the museum’s Corporate Council. “When trustee Jon Lindseth asked me to join a group of corporate advocates for the museum, I couldn’t say no,” Richey says.

“We support the Cleveland Museum of Art because it is a world-class institution,” Sandra adds, “and we think it is important to support local cultural assets, especially those that we enjoy.”

When the Smiths decided to make a gift in support of the museum’s Transformation campaign, Richey knew that using assets from an individual retirement account (IRA) to fund the gift was one of the smartest and most beneficial strategies available. “If you don’t need your IRA distributions, it’s a wonderful way to support public interests,” he explains. “If you take the distribution as income, you pay income taxes on it at the highest rate. When you give it to an institution like the museum, they get 100% of the money and the IRS gets nothing.”

In their estate plan, the Smiths have designated several charities as recipients of their IRA accounts. Thus they avoid burdening their heirs with income taxes those funds would otherwise incur. Individuals with estate-tax liabilities avoid those taxes as well. The Smiths have also donated appreciated securities.

Sandra and Richey use smart planning strategies to make their philanthropy go further and make a greater impact at the institutions they support.